For the month of March, the month when the image of the shamrock is sported worldwide on St Patrick’s Day, instead of focusing on one Book of the Month, we have selected a number of books in the Worth Library which contain the earliest information on the evolution of the shamrock as an Irish icon. Some are examples of early illustrated Herbals and link in with our current online botany Exhibition (http://www.botany.edwardworthlibrary.ie/Home); other references come from historical works or even, in one case, a popular medical text of the seventeenth century. 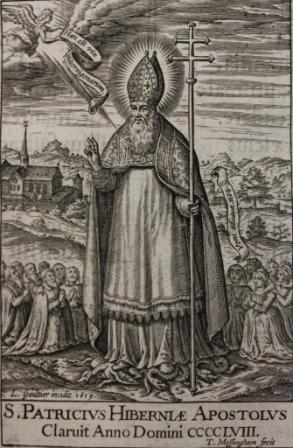 The first mention of the shamrock and an Irish connection goes back to the sixteenth century and surprisingly has nothing at all to do with St Patrick but relates to its use as a food by the Irish. The Flemish botanist Matthias L’Obel (1538-1616), in his Stirpium Adversaria Nova published in London 1571 and collected by Worth in the 1576 Antwerp edition, says in the entry on Meadow Clover Trifolium pratense:

‘Nor is it from any other than this that the mere Irish, scorning all the delights and spurs of the palate, grind their cakes and loaves which they kneed with butter and thrust into their groaning bellies, when as sometimes happens, they are vexed and nigh maddened with a three days’ hunger.’ (p 380)*

L’Obel notes that after gorging themselves, they then tightened their belts to delay digestion so they could go without food for another three days! He goes on to explain that he has gleaned this information from gentlemen attached to Elizabeth I’s army recently returned from Ireland and wonders whether they got this idea from the Scythians of whom Plutarch tells a similar story, but decides that this is unlikely as there was no evidence of contact between the two peoples and that it had evolved spontaneously. 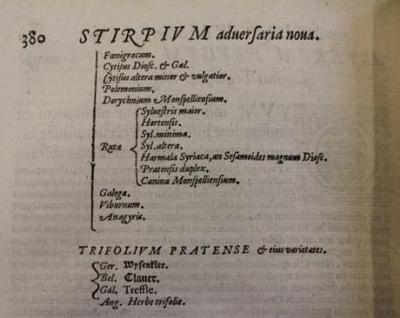 Around the same time, in August 1570, the English martyr,St Edmund Campion (1540–1581) came to Ireland, staying in the house of James Stanihurst (1521/2–1573),the Recorder of Dublin and Speaker of Irish House of Commons, as tutor to his son Richard (1547–1618)whom he had met studying in Oxford. While living there he began an account of the history of Ireland as a contribution to Raphael Holinshed’s Chronicles. Although not yet a Jesuit, as a Catholic recusant, he had to live quietly, moving from house to house to avoid detection and according to Charles Nelson (1991) finished the manuscript in Drogheda on 9thJune 1571. He then entrusted it to Richard Stanihurst and Richard, with Campion’s approval, worked further on the manuscript publishing an edited version with additions under his own name in the first edition of Raphael Holinshed’s Chronicles in 1577.

Edmund Campion’s work was reprinted in 1633 in Dublin under his own name as Two Histories of Ireland The one written by Edmund Campion, the Other by Meredith Hanmer Dr of Divinity. This book is one of the earliest works printed in Ireland in the Worth library and was dedicated to Thomas Wentworth (1593–1641), 1st Earl of Stafford and Lord Lieutenant of Ireland who, by an irony of fate, like Campion before him ended up on the scaffold. In his chapter Of the meere Irish, Campion describes their customs and clothing

It is of interest that in this, the earliest published Irish text in which the shamrock made its appearance, Campion makes no mention of the well-known story of St Patrick’s use of the shamrock to teach the Irish about the Mystery of the Trinity. St Patrick indeed does get a mention on the same page as Campion tells disapprovingly of a ‘lewd Prelate’ short of money who inveigled his parishioners to raise a collection with a story about a fight between St Peter and St Patrick who was trying to get an Irish Galloglass into heaven but got his head broken by St Peter’s keys for his pains.

Nelson (1991) has shown convincingly that sadly the story of St Patrick and the shamrock is just a myth which seems to have originated at earliest in the mid to late seventeenth century. Although the first reference to the legend of the shamrock comes in 1681 in the manuscript of Thomas Dineley’s journal, the first published mention is by the physician and dissenting minister Caleb Threlkeld who noted it as being ‘ a current Tradition’ in his work Synopsis Stirpium Hibernicarum on plants growing round Dublin, published in 1726 and 1727 (Vickery, 1995). Threlkeld is also the first to note that the shamrock was worn on hats on St Patrick’s Day but he says nothing about its use as food although he does refer disapprovingly to the tendency to excess drinking ‘when they wet their seamar-oge’ .Threlkeld’s book is not in the Worth Library but Worth would have been aware of its publication.

Over the years there has been considerable argument as to what exact botanical plant the shamrock is, beginning with Stanihurst’s decision to equate shamrock with watercress in his A Plaine and Perfect Description of Ireland where he changes Campion’s original wording quoted above to read ‘Watercresses which they terme shamrocks.’ The scholarly Stanihurst may have felt that watercress or nasturtium (Nasturtium officinale), mentioned by Xenophon as eaten by young Persian boys and warriors in his Cyropaedia or The Education of Cyrus, which, as Jane Grogan (2007) reminds us, was a popular text in sixteenth-century England, was a more likely alternative food for warriors than shamrocks! Other authors have not followed him. The famous herbalist John Gerard (c.1545–1612),in his The Herbal or generalle Historie of Plantes (1597, Worth had the 1633 edition), says that the Irish name for meadow trefoil (Trifolium pratense) is Shamrocks although he does not mention it as a food. On the other hand, Sir James Ware (1594–1666),the editor of the 1633 edition of Campion’s history, in his own De Hibernia & Antiquitatibus ejus Disquisitionibus notes that their food includes

While Ware gave an alternative English name for the Cochlearia as ‘our Scurvy-grasse’, he did not give shamrock as an alternative for either the meadow trefoil or the watercress. 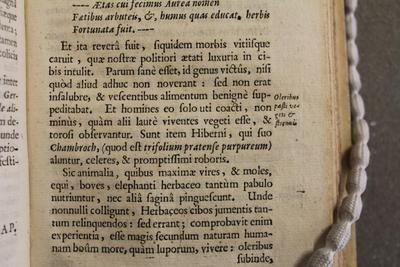 Worth’s copy of the popular work Opera Omnia Medico-Physica by the physician Henry Munday, who was in favour of a vegetarian diet and whose works went into numerous editions before the end of the seventeenth century, also equates the shamrock with clover or meadow trefoil.

‘There are also the Irish, swift and resolute in strength, who are nourished by their Chambroch (which is the purple meadow trefoil).’***

The famous botanist Linnaeus later repeated this quote in his entry for Trifolium pratense, flore monopetale,the red form of clover in Fl Lapponica 1737, with the addition that bread made from the flowers tasted better than that made from spurrey (Spergula arvensis). Vickery (1995, p 346) suggests that this might imply that Linnaeus had tasted bread from both, but concluded he might just have been embellishing Munday’s text. However, given Linnaeus’s interest in bread and in particular its substitutes in time of famine recently reviewed by Räsänen(2007), it is indeed possible that Linnaeus did sample such a bread but no recipe survives.

Worth’s contemporary, Caleb Threlkeld (1676–1728), who had collected a considerable number of Irish plant names in his Synopsis, identified the shamrock as Trifolium pratense album or White Flowered Meadow Trefoyl, and noted the Irish name ‘Seamar-oge’ means ‘Young Trefoyl’ to distinguish it from other forms of trefoil or clover such as the common red trefoil (Seamar Leanne) or the horse trefoil (Seamar Capuil). Both Nathaniel Colgan in the late nineteenth century and Charles Nelson a century later studied plant specimens sent in by the public as shamrock and found very similar results with two main species predominating, with the Yellow Clover or Seamróg (Trifolium dubium Sibth ) mostly widely considered to represent Shamrock, followed by White Clover or Seamair bhan(T repens L). (The remaining plants (<20% of those submitted) were a variety of different species of which the Red Clover (T pratense L) formed only a small percentage). As Nelson has pointed out ‘seamróg’, as Threlkeld noted, just means young clover and does not represent a distinct species. 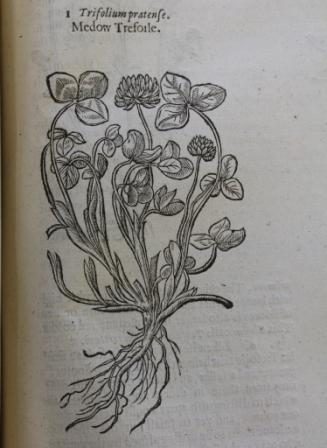 *Translation from the Latin by Nathaniel Colgan.

Campion, Edmund (1633)Two Histories of Ireland The one written by Edmund Campion, the Other by Meredith Hanmer Dr of Divinity . (Dublin: Printed by the Stationary Office).

Colgan, Nathaniel (1896). ‘The Shamrock in Literature: A Critical Chronology.’ The Journal of the Royal Society of Antiquaries of Ireland vol VI, Fifth Series, 211-226.

Gerard, John (1633). The Herbal or Generall Historie of Plantes (London).

Text: Dr Emer Lawlor (Trustee of the Edward Worth Library).