The Anatomy of An Horse.

In 1683, Andrew Snape (1644 – 1708), a sergeant farrier to King Charles II (1630 – 1685), presented the world with one of the most influential equine texts of his time. His work, The Anatomy of an Horse, was the first book on equine anatomy ever to be published in the English language.[1] This fascinating publication contains an ‘exact and full description of the frame, situation and connection of all his parts (with their actions and uses) expressed in forty-nine copper plates (a type of print created with an engraved metal plate).’[2] As an individual from a family who had served the king and the horses of the royal court for a period of nearly two hundred years, Snape was dedicated to strengthening his ability to perform his job. In the introduction of his text, he claimed that his motivations for the creation of such a book were to make himself ‘more capable of serving in his station’ and to encourage others to ‘become more skillful in applying and administering proper remedies to the distempers of that generous animal.’[3] Snape firmly believed that there was no greater limitation to the progress of an art than to believe that it had already been perfected by others.

Andrew Snape, The Anatomy of an Horse (London 1686), Portrait of Andrew Snape.

The term farrier is derived from the term ‘ferrum’ which means horse shoe, and is the combination of the old French word ‘ferrier’ and the Latin ‘ferrarius.’[4] In our modern era, farriers are known solely for their care of a horse’s hooves and for determining how this care and treatment may affect the body of the horse. However, in the sixteenth, seventeenth, and eighteenth centuries, a farrier was not restricted to the trimming and shoeing of horses’ hooves. Instead, farriers became involved in the treatment of general horse ailments, preventative care, and sometimes even surgeries.[5] Several of the remarks made by Snape in his treatise enabled contemporary audiences to begin to grasp the importance of the farrier’s role in the early modern period, particularly within the upper echelons of society. He repeatedly cited Thomas Willis (1621 – 1675) and Helkiah Crooke (1576 – 1648), both important sources for seventeenth-century human medical knowledge, to bolster his descriptions of equine anatomical function.[6] Snape even goes so far as to suggest that, in some regards, the study of anatomy and other medical practices is more necessary for farriers (at least in this period) than for the physician, because of a horse’s inability to explicitly communicate their illnesses and distempers with humans. In Snape’s eyes, the role of the physician and the role of the farrier are on almost entirely equal levels of significance, despite the differences in the type of patient.

The symbolic stature of horses grew during the early modern period, especially in England and its surrounding areas. Many works, including Snape’s treatise, described equines in a way that ‘blends natural competitiveness with anthromorphic aggression, creating a horse that is a superior elemental, expressive of human aspiration to exceed the most frightening phenomena of nature.’[7] Horses were valued as symbols of power and authority, leading to their increasing association with the ruling elite and the more prominent classes.[8] The shift of equine use from that of warfare to that of personal use and sport played a substantial role in the horse representing the identity of its owner. The introduction of new military technologies, such as gunpowder weapons and improved projectile weapons, greatly hindered the horse’s effectiveness on the battlefield. This is not to say that the horse immediately became a thing of the military past, but rather it meant that the horse’s function was shifted from one of conflict and engagement to one of logistics. While horses were still quite useful for the purposes of moving machinery and artillery, the mounted warrior was removed from his paramount position on the battlefield.[9]

The decline of equine involvement in warfare, in turn, changed the nature of equestrian sports. In the fifteenth and sixteenth centuries, equestrian sports were understood to be preparation exercises for warfare as they instilled skills required on the battlefield.[10] Equestrian sports gradually transitioned into entertainment for the elite and practical skills were abandoned for the sake of amusement. Fox hunts and horse racing were integrated into a new ‘fashionable social scene.’[11] Learning to ride, as young, affluent men were encouraged to do, was a form of mastery over an ‘imposing animal of strength and stature’ and such mastery could be seen as ‘justification for aristocratic power and influence.’[12] The wealthy strategically bred, imported, and purchased bigger, faster, stronger, and more beautiful horses. As the disparity between the horses of those in higher classes and those in lower grew, the horses themselves came to stand for their owners. Costly, exotic steeds represented a small, but visible fraction of the nation’s population. Nags, hackneys, and draft horses, whose lives were often poor, brutish, and short, represented the larger and less fortunate equine and human population.

With the horse as such a prominent emblem of an individual’s standing, it is obvious as to why the farrier’s job would be considered so significant and why it would require such attention to detail and dedication to consistent re-evaluations of practices. The notion of horses as a status symbol also explains Andrew Snape’s painstaking efforts to depict and describe equine anatomy in an easily accessible and understandable language. 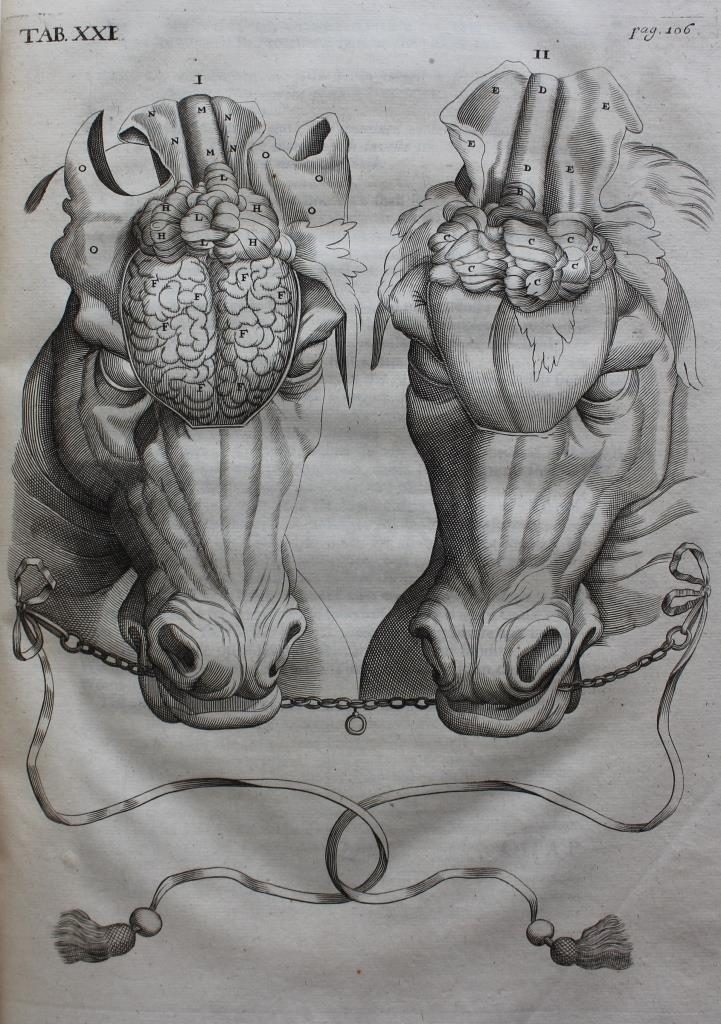 Andrew Snape, The Anatomy of an Horse (London 1686), ‘Image of Two Horse Heads Which Have Been Opened to Show the Skull and Brain’, Tab. XXI, facing p. 106.

Snape divides his treatise into five books. The first contains descriptions of the lowest belly or paunch. The second is comprised of explanations regarding the middle venter or the chest. The third chronicles the individual parts of the uppermost venter or the head. The fourth details all of the muscles of the equine body. The fifth includes descriptions of all the bones of the body. Each book contains a number of chapters that identify individual parts of the anatomical area that the book is dedicated to (for example, a chapter in Book Four might focus on the muscles of the eye) and explains the individual part’s function. Each of the five books contains a number of intricate anatomical copper plates that depict the body systems and parts discussed by Snape. The copper plates are primarily taken from the woodcuts in Carlo Ruini’s (1530 – 1598) book on the anatomy of the horse, Anatomia del Cavallo, with some slight modification to the illustrations.[13] It is unclear whether the other copper plates contained within Snape’s book are renditions of dissections that Snape himself conducted or whether they were taken from different source, like the woodcuts from Carlo Ruini’s work. The copper plate diagrams and copied woodcut diagrams in Snape’s treatise are labeled with letters. Each diagram has a corresponding table which contains the identification for each body part that is labeled with a letter.

Additionally, this particular version of Snape’s treatise includes an appendix which comprises of two discourses: one on the generation of animals and the other on the motion of the chyle and the circulation of blood. The intention of these two additional discourses was to bestow basic anatomical and natural knowledge on those who understood plain language as well as to more learned individuals. Why he decided to publish his discourses as a part of a book concerning equine anatomy instead of publishing them separately or turning them into a new book is unknown.

Snape’s The Anatomy of an Horse follows the traditional medical beliefs of the early seventeenth century. The first two chapters of his book detail the hair and scarf-skin (first layer of skin) of the horse. It is in these two particular chapters where Snape makes some of his most wildly inaccurate (and rather amusing) statements about the functions of the equine body. The medical discoveries and standards that had emerged during Galen’s and Hippocrates’ lifetimes remained firmly cemented in medicinal practices up through the seventeenth century.[14] This is particularly evident in Snape’s references to the four humors of the body. He claims that ‘as for the colors of the hairs, they are various, according as is the humor which doth predominate in the body: for as the humor is which is driven forth towards the skin for their nourishment, such will the color of the hair be.’[15] Snape also asserts that the dust that comes off of horses, even after they have been well groomed, is the process of humors leaving the body from the pores that the hairs grow out of. He believes that if horses are not properly cared for, these pores will become clogged and the humors will be unable to escape, leading to the shedding of the horse’s hair.[16]

Furthermore, Snape’s treatise demonstrates typical early modern period misconceptions concerned ailments, diseases, and other distempers. While the majority of his statements regarding the bones and muscles are correct, his declarations regarding other tissues and ligaments are not. He states that sometimes ‘evil distempers’ are generated by vapors being caught between the horse’s two layers of skin. Particularly, he gives the obstruction of pores by sudden cold after a hard riding or other strenuous activity as an example in which vapors may become caught between the two skins and causes inflammation in the limbs of the horse.[17] Rather than considering the possibility of injury (tear, sprain, strain) to the muscles or tendons that he details and has illustrated in his book, the long-standing medical beliefs of his time encouraged him to think according to a system of balances and imbalances.

Despite its assortment of assertions now proven to be erroneous, Andrew Snape’s The Anatomy of an Horse is both a historical and a modern marvel. Edward Worth’s copy, printed in 1686, would have been an excellent addition to any learned gentleman’s collection. Perhaps Worth saw great value in treatises concerning equines or anatomical science. Or perhaps Worth, as a connoisseur of medicine, natural history, and the book itself as an object, simply desired to possess a book that neatly combined a large number of his personal interests. Whatever Worth’s reasons for purchasing Snape’s treatise were, he added an extraordinary example of Animalia scholarship and anatomy to his collection for both his own personal benefit and the benefit of readers for hundreds of years to come. 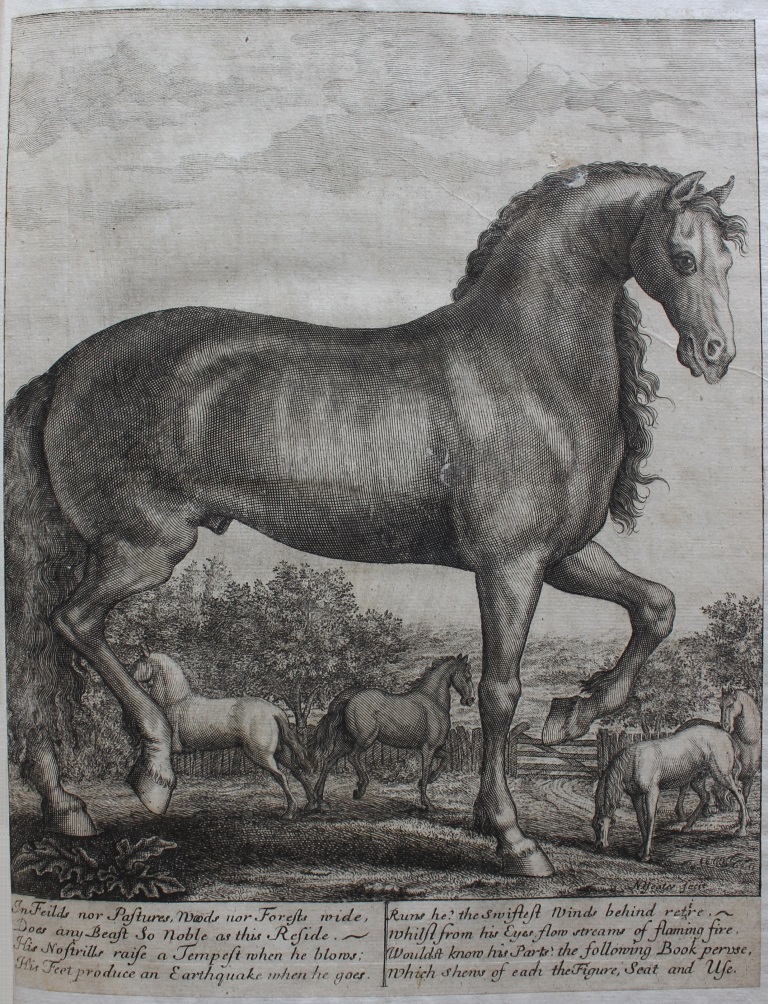 Andrew Snape, The Anatomy of an Horse (London 1686), Image of Horses “In Fields nor Pasture”.