The Abbey of Saint Denis near Paris has been the subject of much scholarship. The architectural features were studied in particular in the past century but scholarly interest in this famous abbey began long before the nineteenth century. St. Denis expert Sumner McKnight Crosby singled out Benedictine monk Dom Michel Félibien’s book, Historie de L’abbaye Royale de Saint-Denys en France, 1706, as one of the first serious historical works on the abbey. Félibien began his work with a chronological history of the abbey. He catalogued all of the abbots of the Abbey over the centuries and listed the kings, queens, royals and important individuals who were buried there. He described all of the major events connected to the royals and the abbey. In particular Crosby noted that Félibien included almost all the available information on the Carolingian and early Capetians. Félibien also described the abbey physically and there are several illustrations of the tombs, treasures and a plan of the church included in the book. The end of the book contains copies of the primary sources available to Félibien on the abbey including papal bulls, royal charters, and abbots’ letters. This section also includes writings by the famous twelfth-century Abbot Suger who was responsible for the improvements to the abbey church at the height of French gothic architecture. Suger is the subject of many scholarly articles and books relating to the abbey and has generated a great deal of interest in this period of the abbey’s history. Félibien however divided his work fairly to all periods of its history and dedicates only the fourth book to Suger within the chronological history.

Now surrounded by its namesake industrial suburb of Paris, the abbey of St. Denis, founded in the fifth century began as a field around which the town formed.

Saint Denis was, according to legend, born in Athens in the first century A.D. and converted to Christianity by the Apostle Paul. On the death of St Paul, Pope Clement I sent missionaries to Gaul to convert people to Christianity. St. Denis led these missionaries to Gaul and sent them throughout the region. St. Denis himself became the first bishop of Paris and quickly set about founding churches in the surrounding areas gathering missionaries who went on to spread the word throughout France. The Roman prefect in Gaul took note of their activities and under the rule of Domitian ordered for the arrest of Denis along with two others. When the men declined to renounce their beliefs they were tortured in what appears to be all of the numerous ways Romans had devised to deal with Christians included been placed on crosses and attacked by lions. Finally they were beheaded at Montmartre. However St. Denis picked up his decapitated head and walked five miles to a field which became the site of the abbey. He chanted psalms with angels until he stopped at his burial point and lay down. His companions remained at Montmartre but a Christian woman drugged the soldiers who came to throw their bodies into the river Seine and reunited them with Denis at the field. Miraculously the earth miraculously sprung grain which hid their graves overnight. First a modest monument was built, then a church, and finally an abbey was later built on the site. Many further miracles were attributed to St. Denis and as early as the fifth century the cult of St. Denis grew out of these apocryphal tales.

As leader of all of the first French missionaries St. Denis became responsible for bringing Christianity to France and patron Saint. When Christianity became the dominant religion of France the abbey of France’s patron saint became increasingly important. It became the site of coronations and burials of French royalty and the abbot was a powerful man whose opinion was sought on matters of great importance. The first king to be buried there was Dagobert I in 639 but as early as 589 individuals with royal lineage were buried there. Each new monarch sought the approval of the abbey and when the French revolution occurred St. Denis was plundered because it represented royal power.

In the seventh century Dagobert I gave land, money and treasures to the abbey and began the tradition of royal patronage. Dagobert’s gifts to the abbey were said to be so numerous that he was given the honour of being called the founder of the abbey. Dagobert I founded a fair in 635-6 for the feast of St. Denis that helped to finance the abbey and to which traders came from all over France. By the 12th century the numbers of pilgrims was so great that the church was enlarged to accommodate them. 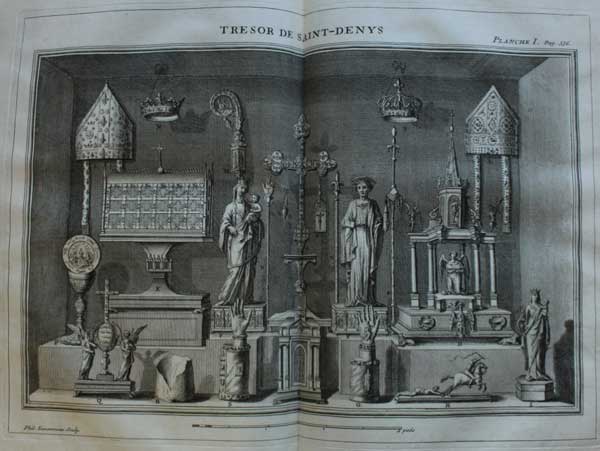 Félibien’s history is important because it was written before the revolution and described and illustrated items that did not survive past the 18th century. The gifts given by Dagobert I bestowed wealth and power to the monastery and began the abbeys true courtship of the monarchy. Félibien list Included in these treasures were an eagle clasp to close 7th century King Dagobert’s robe and his sceptre. In reality the inventory of objects said to be given by Dagobert included items from much later than the 7th century.

Dagobert set the trend for intimate relations between the abbey and the royals of France. Charlemagne, his father Pepin, and grandfather Charles Martel, were all buried at St. Denis. The abbey provided legitimacy for Martel and his sons were educated there. When Pope Stephen II wintered in St. Denis in 753-4 he confirmed Charles Martel’s line of succession by naming his son Pepin and his grandsons Charles (Charlemagne) and Carloman future kings of France.

Since the restoration of the abbey during the nineteenth-century gothic revival there has been much debate over the true nature of the abbey’s original features. Félibien described the three portals of the abbey flanked with statues of Kings, Queens and benefactors of the abbey. These portals were purposely removed by the abbot in 1771 and therefore Félibien’s description provides important evidence for the original sculptural scheme. 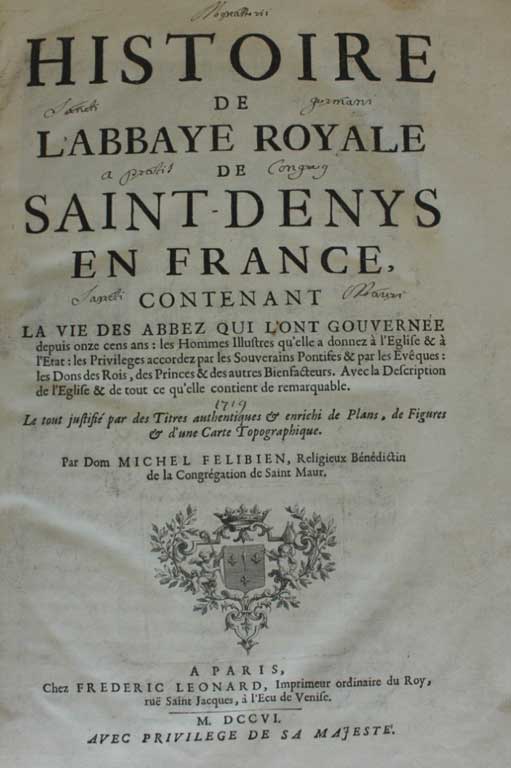 Félibien’s Historie de L’abbaye Royale de Saint-Denys en France contains beautiful illustrations, important source documents, and an interesting chronological narrative of what was once the most powerful abbey in France. Lastly it is a wonderful example of the diversity of Doctor Edward Worth’s (1676 – 1733) interests which are preserved in the Edward Worth Library.

Alison Stones in collaboration with the University of Pittsburgh Digital Research Library, Images of Medieval Art and Architecture: http://www.medart.pitt.edu/image/France/St-denis/sdenmain.html