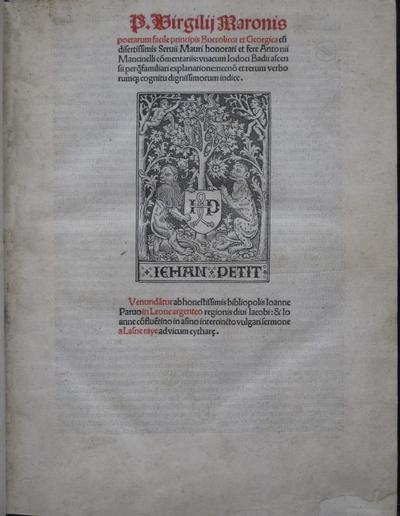 This is volume one of Worth’s two-volume set of the works of Publius Vergilius Maro (70BC-19BC), more commonly known as Virgil. Volume one contains the Eclogues (called the Bucolics because of their use of pastoral poetry) and the Georgics. Virgil had begun the Eclogues in 42 BC, around the time of the Battle of Philippi and they were written in praise of Augustus. Quintessential pastoral poetry, the poems combine themes of love and philosophical learning. The second text, the Georgics, was not as widely studied and had a different theme, ‘On working the Earth’. Based on the model of Hesiod’s ‘Works and Days’, Renaissance readers were as likely to read it as a scientific text as regard it as a poem.  Donatus says that Virgil wrote of ‘pastures, fields and princes’ in that order and we see this reproduced in Worth’s two-volume edition which contains the Eclogues, Georgics and Aeneid. 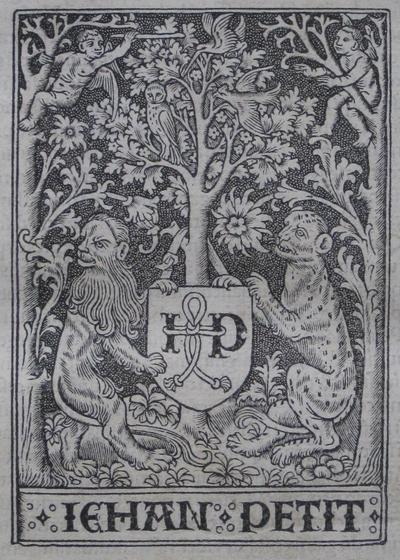 The book was printed by Thielman Kerver for Jean Petit and Johann de Koblenz in 1500. Petit (fl. 1492-1530) had a number of printing devices and Davies (1935) dates this particular one to 1498-1500, when Petit’s shop was at the sign of the silver lion,  depicted here in his printer’s device alongside a leopard, birds and amorini. The ornate nature of Petit’s device is mirrored by that of his colleague, Thielman Kerverof Coblenz, who worked in Paris from 1497-1522. As we can see below, Kerver’s printer’s device uses similar flowers to those in Petit’s but instead of a silver lion, Kerver favoured the device of a unicorn. This too was a reference to his printing house on the Rue St Jacques, which was well known for its sign of a unicorn. On the colophon, which precedes Kerver’s printer’s device, we are told that Kerver printed it on the Ides of March (15 March) ‘post Jubilaeum’ – the Jubilee year was 1500. 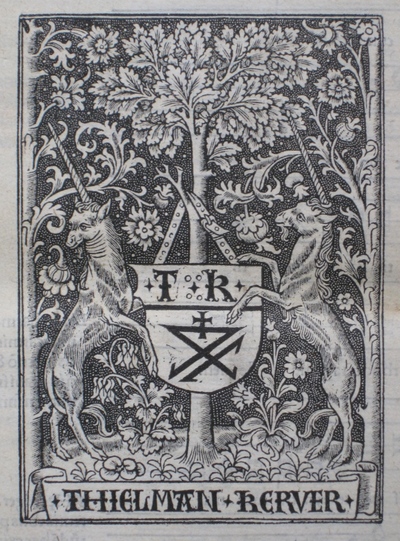 The decision of Petit and Kerver to produce a deluxe edition of the works of Virgil (volume two, printed in 1501, contains his famous Aeneid), was not unusual. Classical authors sold well and, as Wilson-Okamura (2010) explains, at the time this book was being printed the two most popular classical authors were Ovid and Vergil (in that order). Virgil’s poems had been among the first works of classical antiquity to be printed by early printers such as Sweynheym and Pannartz and, in 1501, when the famous Venetian printer Aldus Manutius started a new series of classical authors, Virgil was his first choice. Certainly judging by the numbers of editions of Virgil’s works which were printed in the sixteenth century, there was a ready market. Wilson-Okamura (2010) states that ‘between 1469 (when the editio princeps of Virgil’s works was printed at Rome) and 1599 there were approximately 750 print runs of Virgil and Virgil commentaries’. Given that most print runs of the period numbered between 1,000 to 1,500 copies it is clear that printers such as Kerver and Petit viewed Virgil as a good printing investment.

As we can see from the title-page, the principal commentators were almost as important as the original author. Marius Servius Honoratus (fourth century AD), the most famous of the ancient commentators, was a grammaticus and the writer of one of the most popular commentaries on Virgil. His commentary had been well known in the Middle Ages and continued to be popular in the Renaissance, sometimes even being published on its own, without Virgil’s poetry. His fellow ancient commentator on Virgil, Tiberius Claudius Donatus (430s AD) was a discovery of the Renaissance – his commentary on the Aeneid, which is used extensively in volume two, had been discovered by Poggio Bracciolini in the early fifteenth century.

Alongside this ancient commentators a number of late fifteenth-early sixteenth commentators are mentioned: Filippo Beroaldo the Elder (1453-1505) had written an acerbic commentary on Servius while Maffeo Vegio (1407-58), was responsible for a supplement to the Aeneid which from 1471 onwards was often attached to editions. Undoubtedly the most important of the Renaissance commentators was Jodocus Badius Ascensius (1462–1535) whose commentary continued to be printed up to the end of the sixteenth century. It was a long commentary, primarily aimed at explaining the text to students, and, as Wilson-Okamura (2010) points out, like much of the scholarship on Virgil that was published in the Renaissance, it was not innovative. This had the advantage, however, of making an edition of Virgil containing ancient and contemporary commentaries a harmonious whole.

But it was an expensive production, and not just because of the length of Badius Ascensius’ commentaries, but because it forced printers such as Kerver and Petit, to come up with innovative methods of presentation. As we can see from this illustration, they achieved this complex presentation in a very sophisticated manner. The original text of the poem is identified not only by its central position but also by the fact that it is in largest font. The late classical commentary of Servius is placed   immediately underneath it and is identified by his name in the margin, while the contemporary commentary of Badius Ascensius frames the page and is again identified by name. 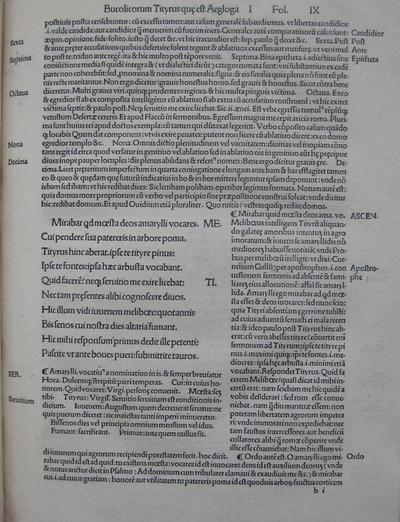 The binding on the Virgil Opera tells us a lot about book collectors in the early eighteenth century. Worth was a connoisseur collector, interested in fine printings and fine bindings. He bought many books in text-block format and had them rebound in Dublin – making the Worth Library a superb resource for the history of early eighteenth-century bookbinding in Ireland. But he also bought books ready bound, particularly in fine bindings and his Virgil is an example of the latter. 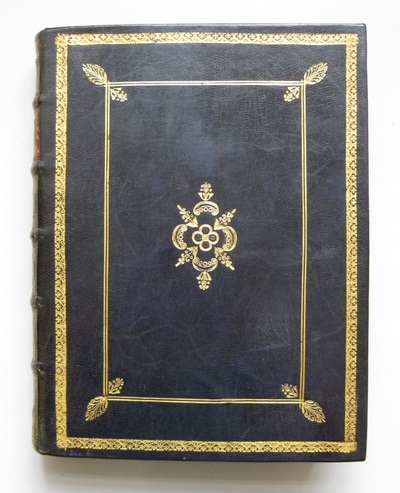 We know that this was bound c. 1710 at Amsterdam for a Dutch merchant called Goswin Uilenbroek (1658-1740). Uilenbroek was, like Worth, a connoisseur collector and used a number of Amsterdam binderies to bind his works: the Uilenbroek and Art Book Bindery as well as the Bird’s Head and Justitia Binderies. We can tell that this came from his library because of two thing. First of all, we have Worth’s copy of the sale catalogue of the Uilenbroek sale in 1729, where the Virgil is marked. Secondly, we can tell by the style of the binding that it had previously been owned by Uilenbroek for, as Storm van Leeuwen (2006) points out, Uilenbroek had a very idiosyncratic taste in bindings. He had a particular preference for gold-tooled black morocco (goat skin) – popular up to 1710 in Amsterdam, and for black and purple daubing, rather than gilt edges. Uilenbroek’s decision to have this work rebound was typical of early eighteenth century collectors who sought to enhance the value of their rare printings by casting off their original bindings and rebinding them in gold-tooled bindings. Many incunables (i.e. books printed prior to 1501) met a similar fate.

Davies, Hugh William (1935), Devices of the Early Printers 1457-1560. Their History and Development with a Chapter on Portrait Figures of Printers (London).