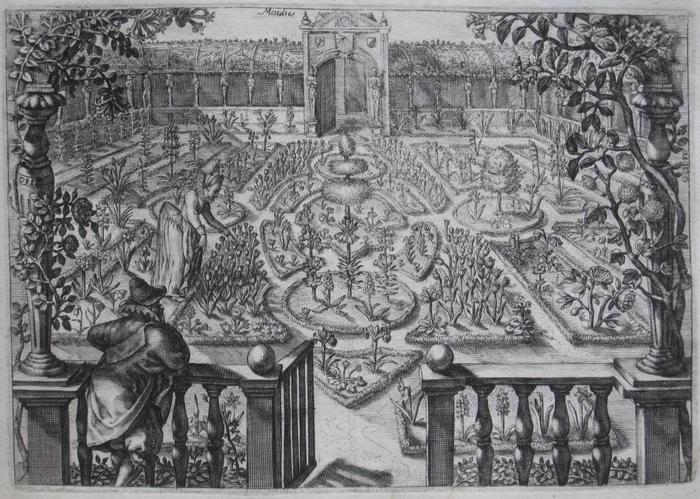 The July 2012 Worth Book of the Month is the Hortus Floridus or ‘Flowery Garden’ of Crispijn van de Passe the Younger (1589-1670) which has been described as the one of the loveliest of the florilegia or books of pictures of ornamental plants designed to show the beauty of flowers as distinct from botanical herbals which provided illustrations to help identify useful plants. Crispijn, who was one of a family of well known engravers, was only 24 years old when the book was published in 1614 and according to the title page he had spent four years preparing the over 160 copper engravings celebrating the beauty of the flowers he selected. In this he was helped by his father Crispijn the Elder (ca. 1565-1637) (who, according to Willes (2011, p. 174) may have contributed text), and his two brothers Wilhelm (1598-ca. 1637) and Simon (ca. 1595-1647), who have signed a small number of the engravings. 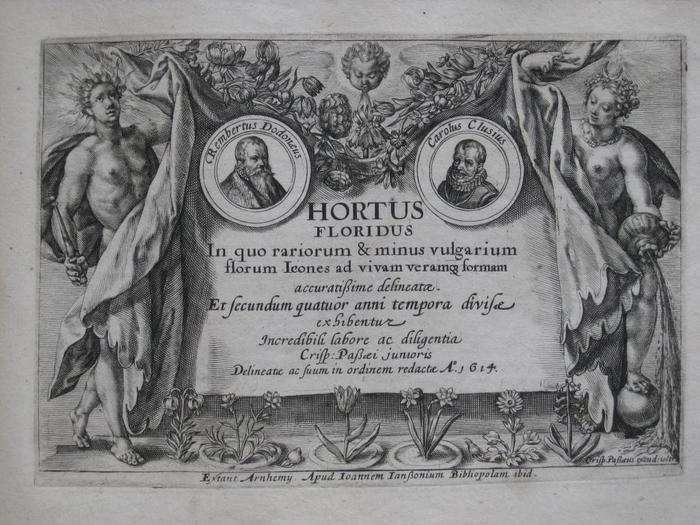 Crispijn the Younger was a very skilled engraver and well placed to undertake such a work. He was undoubtedly influenced by the work of the world renowned botanists Carolus Clusius (1526-1609), and Rembert Dodoens (1517-1585), seen here on the title-page of Worth’s copy of the Hortus. Both men had been based at the University of Leiden: Dodoens was Professor of Medicine there from 1582 until his death three years later, while Clusius had been appointed the first Director of the Leiden Botanic Garden in 1593. Clusius had rapidly assembled a collection of over 1000 plants and had been keen to encourage artists, in particular the artist Jacques De Gheyn II (1565-1629), to undertake the depiction of plants in a scientific manner ‘nach den leben’. Swan (2005) suggests that this attention ‘to the appearance from the life’ was one of the influences leading to the development of the Dutch still life as an important art genre in its own right during the early years of the seventeenth century and, as we can see in the text of this illustration, the beautiful engravings of the Hortus Floridus were drawn from life. 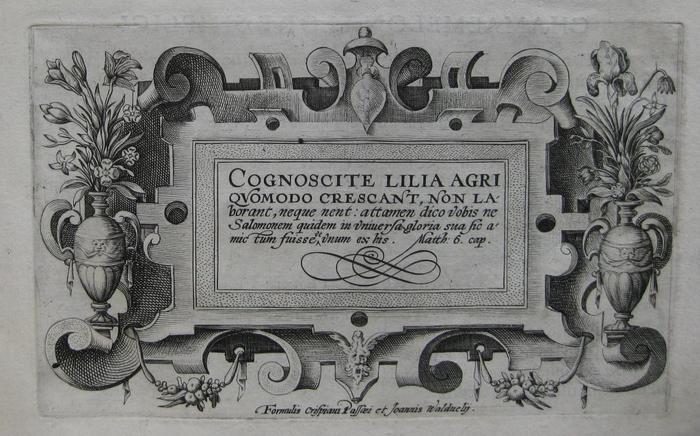 An earlier version of the Hortus Floridus, known as the Altera Pars, is included in the Worth Hortus. As the illustration above demonstrates, this draws on the Matthew Gospel text: ‘And why take ye thought for raiment? Consider the lilies of the filed, how they grow, they toil not, neither do they spin: And yet I say unto you, That even Salomon in all his glory was not arrayed like one of these’. Early editions of the Hortus (including the Worth edition) have a preface entitled Benigno Florum written by Crispijn the Younger which likewise reflects this theme. For Crispijn the Younger, scripture places flowers greater than Solomon in his glory ‘whether by variety of their forms, sweetness of scent and grace of their petals.’ He can render no greater praise to the dignity and grace of flowers than by illustrating them.

As this illustration makes clear, the Hortus Floridus in many ways resembles a modern coffee table book or photograph album. There had been florilegia in manuscript form and this tradition continued but the introduction of copperplate engraving techniques, as opposed to earlier woodcut technology, made possible the production of printed florilegia commencing in late sixteenth century and more commonly in the beginning of the seventeenth century. In Worth’s copy we see that each botanical engraving is printed on one side of each page and is balanced by the corresponding description of each plate on the opposite page. Because copper engravings, unlike woodcuts, could not be incorporated into the typeface, production of the book involved a two-stage printing process where the engravings were first printed on one side of each leaf, and the descriptions of each plate were then printed on the reverse in a separate printing press. Each plate contains two plants.

The Hortus seems to have been first printed in Latin but was translated into a number of languages: French, Dutch and English. Disentangling the history of the printing of the Hortus is very difficult since no two editions of it are identical. Confusion is immediately apparent over the place of publication: the title-page mentions Arnhem and the bookseller Jan Jansson (1588-1664), but the half-title for the Summer garden refers not only to Jansson but also to the printer Hermann Borculoi at Utrecht. It seems likely, as Savage (1923) argues, that the first copies of the work were initially printed and engraved at Utrecht and sold at Arnhem. Given the complexity of the work it is unsurprising to learn that the endeavour took a few years, since the sections are variously dated 1614-1616. There are differences also in presentation of the illustrations: most of the plants are usually named in Latin but in some cases their Dutch, French or Italian names are given as well. In a number of copies, some or all of the engravings were hand coloured either under the supervision of Crispijn the Younger himself or subsequently arranged by their purchasers. The Worth Hortus is the Latin text with 166 plates including additional earlier material added (the Altera Pars). The illustrations of the Altera Pars, which Savage (1923) indicates were engraved by Crispijn the Younger from designs of his father and Joannes Woutnel, are not to the same standard as his later work which we see in the rest of the book. Their inclusion in the Hortus Floridus is important though, not least because they give us an indication of the development of Crispijn the Younger’s skill as an engraver.

Nineteen of Crispijn the Younger’s plates are devoted to the flowers of summer. To mark the Worth Book of the Month for July I have chosen to concentrate on what Walahfrid Strabo, the ninth century Abbot of Reichenau, rightly called ‘the Flower of Flowers’: the rose. Crispijn presents four exemplars in Plates 12 and 13. Unlike today, the number of rose varieties at the beginning of the seventeenth century was limited and usually only had one blooming season (non- repeat flowering) but most had a delicious scent often lost in modern roses. It is difficult to be sure of the origin of the roses Crispijn describes as the history of rose cultivation is complicated by inter-breeding. However, it is generally accepted that they are all hybrids descended from the European Gallica and Damask roses (Koopman et al, 2008). 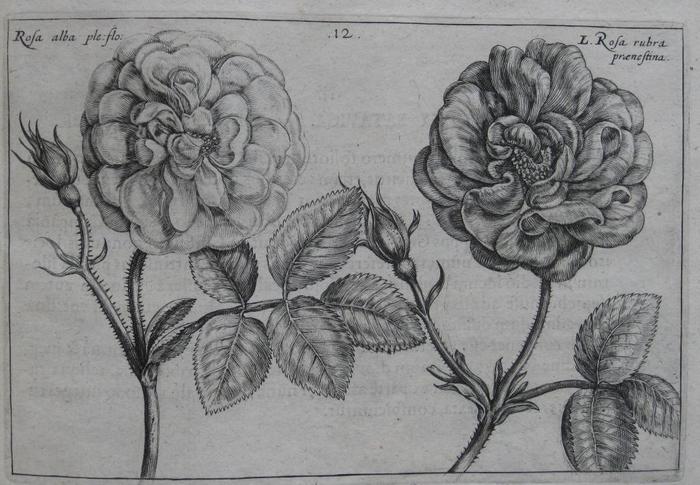 The first rose shown by Crispijn in Plate 12 is a white rose Rosa alba plena flora (Rosa Alba maxima). It was tall and strongly scented and a similar white rose is included in the album of watercolours painted by Jacques de Gheyn from specimens in Leiden between 1600-1604 which were subsequently bought by the Emperor Rudolf II. Rosa alba is also pictured in Worth’s copy of Basil Basler’s Hortus Eystattensis (Nuremberg?, 1640). In the same plate is a red rose described by Crispijn as the Red Praenestian Rose. The original Praenestian rose was rose described by Pliny in his Natural History as growing wild in Praeneste a town now called Palestrina outside Rome and similar roses can be seen in paintings in the houses in Pompeii. It is however difficult to botanically identify Pliny’s roses but experts agree that they are all variants of the European native Rosagallica. Worth’s copy of Clusius demonstrates that another name for this rose was Rosa provincialis. 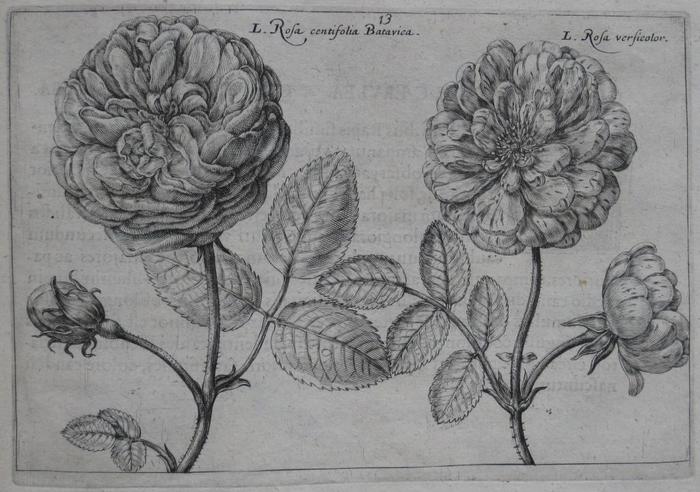 Plate 13 shows Rosa centifolia batavica or the Dutch hundred petalled rose. This highly perfumed red rose with over hundred petals was described by Clusius in Rariorum Plantarum Historia 1601.  He had received two pieces of this rose from his friend the apothecary Johann Van Hoghelande one of which rooted and in 1591 he had over forty flowers. As might be expected considering Clusius’s dedication to the scientific method, he tells us he counted the number of petals and confirmed that many of them indeed did have about one hundred petals. Crispijn’s text equates this rose to the Rosa centifolia described by Theophrastes and Pliny but it is generally accepted (Potter, Gecki, Thomas, Christopher) that this original Roman rose is lost and that the rose Crispijn pictures was raised in the late sixteenth century in the Netherlands. This would explain its descriptor ‘batavica’, which refers to the Latin name of the Low Countries. The final rose Crispijn presents is Rosa versicolor, a striped rose. Clusius also describes seeing this rose in the Frankfurt garden of Joannes Resteau in his Rariorum Plantarum Historia 1601. Potter (2010) says that a similar striped rose can be seen in a painting on the walls of the House of Venus Marina in Pompeii. However, as before, the botanical relationship between these roses and Clusius’ roses  (which may also be same as Gerard’s ‘blush rose’ or Parkinson’s Rosa versicolor) is unclear. Perhaps the most famous of all striped roses is the Rosa mundi (now attached to Rosa gallica versicolour), which was a sport of the old Apothecary rose (Rosa gallica var officinalis). It is said to have gotten its name from the twelfth century Rosamund Clifford (b. before 1140?, d. 1175/6), the mistress of Henry II (1133-1189). According to later medieval legends, Rosamund was killed by the Queen, Eleanor of Aquitaine (1122?-1204). A contemporary source, Gerald of Wales (1146?-1223?), writing around 1200, makes no mention of this supposed murder but instead links the ill-fated Rosamund to the rose which may bear her name. He states that Henry II, after imprisoning the Queen,  ‘having long been a secret adulterer, now openly flaunted his mistress, not that rose of the world [rosa-mundi] of false and frivolous renown, but that rose of unchastity [rosa-immundi]’ (Gir. Camb. Opera, 4.21–2). It is perhaps ironic that Rosa Mundi is linked in this way to the first of the Plantagenets since another famous striped rose is that of Lancaster and York, which marked the end of the Plantagenet dynasty.

While the Hortus also has dedicatory engravings to Clusius and Dodoneus and Crispijn pays tribute to the investigations of both in his preface, the Hortus is not designed as a scientific treatise. Nor, as has been suggested, is it a bulb catalogue although it may very well have sent avid gardeners scurrying out to try and find the plants illustrated. Sacheverell Sitwell (1990) perhaps best describes it when he says that ‘the Hortus Floridus of Crispijn de Passe is intended for a larger public, to be looked at perhaps, on winter evenings with snow outside and in the flickering lighting of early seventeenth century rooms, with summer still far away ‘….

Rohde, Eleanor Sinclair, (1974), Preface in Crispin van de Pass A Garden of Flowers All 104 engravings from the Hortus Floridus of 1614 translated from the Latin by Spencer Savage (Dover Publications, New York).

Text by Dr Emer Lawlor, Trustee of the Edward Worth Library.